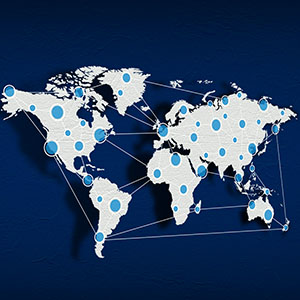 Before Xbox Live or Skype became household names, there was TeamSpeak. TeamSpeak has been allowing gamers and business users alike to communicate in real time via voice since 2001.

As the Internet began to gain popularity in the late 1990s, PC gamers quickly realized the opportunity for cooperative and versus play that online gaming would allow. What used to only be possible via LAN could now be extended to other parts of the world. No longer were you confined to playing people from your dorm as the whole world suddenly became a connected network of PCs, with millions of gamers waiting to jump in on the fun. The only problem was the lack of a solution that would allow remote PC users to communicate with each other. Because broadband penetration was still low, Internet-based communication was mostly limited to text-based chat. Very few companies offered voice services over networks, and the solutions that were available were neither robust nor popular. Enter TeamSpeak.

Quickly after its release in October 2001, TeamSpeak established itself as a competent voice communication program for consumers and enterprise users. While gamers were first to embrace TeamSpeak as their go-to communication app, many in the corporate world also resorted to TeamSpeak as the primary VOIP network for their collaborative needs, thanks to its robust and feature-rich client software. VOIP was already a known technology in the early 2000s, but TeamSpeak's advantage was superior voice and connection quality, accomplished through a combination of efficient sound compression and thorough protocol optimizations. TeamSpeak hosting servers cropped up around the world, ready to serve a fast-growing user base.

But of course, it was gamers who launched TeamSpeak's popularity into the stratosphere. PC games were becoming increasingly sophisticated, and a robust voice chat was a must for team-based play. By the time TeamSpeak 3 entered public beta in 2009, it was already a wildly popular service, light years ahead of competition. After nearly 2 years of tweaking and polishing, TeamSpeak 3 was certified to release in December 2011 to rave reviews from regular users, enthusiasts, and technology reviewers everywhere.

Today, TeamSpeak remains immensely popular, despite several other VOIP solution being available on the market. TeamSpeak's reputation in numerous gaming communities is second to none, and it remains the top communication platform for some of the world's biggest software titles. Hosting TeamSpeak servers remains a lucrative business and rivals enterprise cloud services in profitability.